A delicious Breakfast Enchilada meal. Tortillas filled with eggs, sausage, hash browns then covered in enchilada sauce and topped with cheese. Does it get any better than that?

This is another recipe from a cooking class that I took. Pictures were difficult as I had a partner and although she was very understanding, Chef Christal Jakopak moved along very fast.

In a medium skillet add the oil

and cook over medium heat. 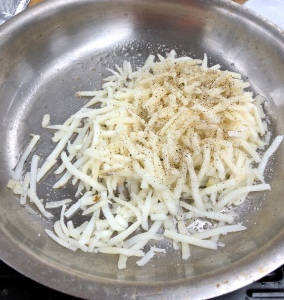 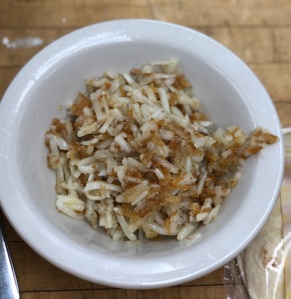 from the pan and set aside.

Add the sausage to the same pan

and cook until no pink remains.

In a medium bowl whisk together

the eggs, milk, salt and pepper.

Pour the eggs into the pan and

cook with the cooked sausage.

When the eggs are cooked to a soft

scramble, remove pan from the heat.

Lay the tortilla’s flat on the counter.

Divide the egg mixture evenly between

the 8 tortilla’s. Divide the hash browns

evenly between the 8 tortilla’s.

Sprinkle with half of the cheese.

Tightly roll the tortilla’s and place them,

seam side down, in about a 4″ deep pan that

is sprayed with cooking oil. We split our recipe

between us so we each only had four enchiladas.

Pour the enchilada sauce on top.

Top with the remaining cheese then cover

tightly with foil. Bake in a preheated 350 degree

oven for 25-30 minutes or until the sauce is

bubbly and the cheese is golden then serve.