Who doesn’t love BBQ Ribs that just fall off the bone and taste delicious? To make them all you have to do is put them in the slow cooker and go about your day. Sounds to good to be true right? Wrong! Once you make them this way you will always want to make them this way. 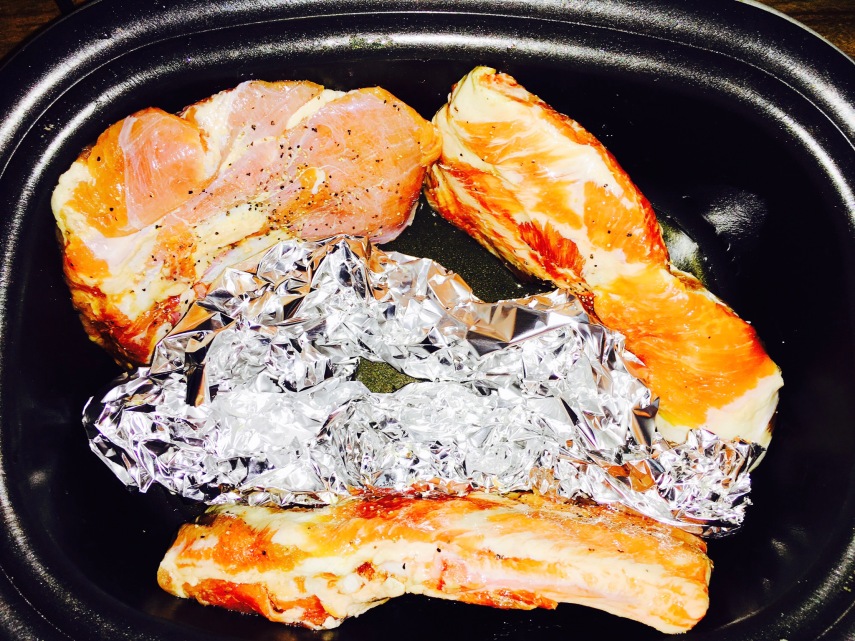 Cut your ribs so that they will fit into your slow cooker when standing them on their side like in the picture. Salt and pepper both sides of the ribs or add your favorite rub. If you have a bunch of ribs just arrange them so they will stay upright. Try not to lean them so they are laying flat against each other. If you only have a few, like we did, wad up foil and place it between the ribs to keep them upright. If you want baked potatoes, wrap the potatoes in foil and seal them tight. Use them to prop up the ribs instead of just wads of foil. Now all you will need for dinner is a vegetable. Once the ribs have been cooking on low for 8 hours, remove them from the slow cooker and place them on a baking sheet lined with foil.

Brush with your favorite BBQ Sauce. Place them under the broiler in your oven for a few minutes until the BBQ Sauce sticks to the ribs.

Serve with a side of extra BBQ Sauce for dipping.

1 slab of ribs, cut to fit the slow cooker

salt and pepper to taste

Add water to the slow cooker. Salt & pepper ribs or put on a rub. Lean them sideways and upright in the slow cooker. Use wadded up foil to hold them in place or tightly wrap potatoes in foil between the ribs for support and to eat for dinner. Cook on low for 8 hours. Remove from slow cooker and place on a foil covered baking sheet. Cover the ribs with your favorite BBQ Sauce. Place under the broiler in your oven until the sauce sticks to the ribs.