Once a year I take my granddaughter to garage sales in our small township in the country. There were 15 families having a garage sale this year. We walked into one and it was an entire barn full of things they were selling. The elderly gentlemen stood up and said “I have been waiting for a cute little girl to show up!” He walked to the stuffed animals and gave her two. My granddaughter was delighted!

I usually don’t like the kind of garage sales like theirs because there weren’t any prices on anything. I didn’t see anything worth buying until I spotted this new waffle maker. People that follow me know I love gadgets! Just out of curiosity I asked how much it was. The elderly woman says a buck! She said everything is negotiable so just ask. That was all I bought but I felt like it was a steal!

We already have a waffle maker that belonged to my husbands father, bless his soul. However, it has to be close to 50 years old and it makes me nervous every time we plug it in!

I felt this waffle maker was easy to use although it didn’t brown the waffles evenly. That didn’t bother me though because the waffles were still cooked completely and tasted great!

Clean up was a breeze. The Teflon coating released the waffles with ease leaving no trace of batter behind. It would have been nice if the hot plates could have been removed but for the few times I make waffles, I didn’t mind.

Below is a link to a delicious recipe for waffles. This recipe is fabulous to eat right away or freeze them separated by waxed paper and put then put them into a freezer bag. When you take them out of the freezer, pop them into the toaster frozen! Simple and delicious! 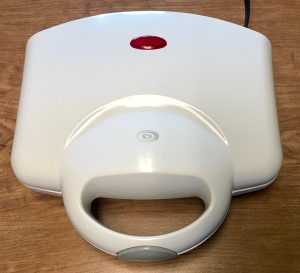 Amazon but one that looks similar to this one sells for $39.99.

I guess I hit the jackpot at that garage sale!